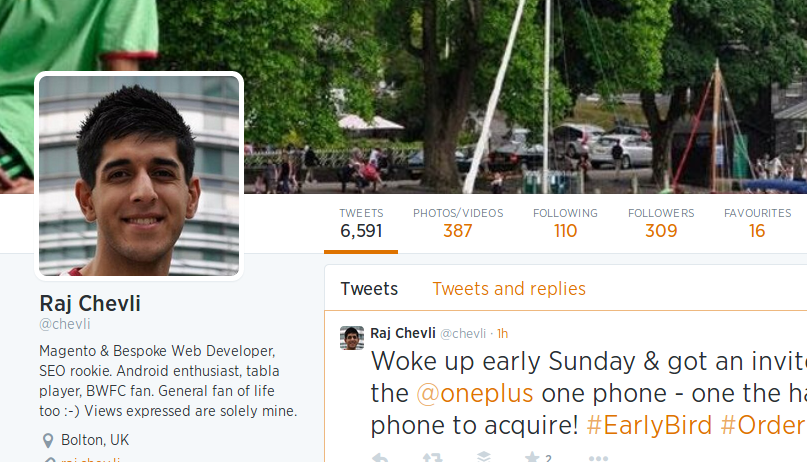 It has been a while since I started using twitter, over 5 years (February 2009) according to twitter – around about the time I purchased my first Smartphone (HTC Dream). Back in the day it wasn’t so popular so I didn’t really think much about who I should and shouldn’t follow. I barely tweeted back then either however I used read twitter during my commutes to and from University. The more popular it became, the more people started to follow me and consequentially I would follow back if I knew them or were particularly interesting. It got to a point where I had so many tweets on my timeline that I needed to do something about it. Unfortunately this meant I couldn’t be on “#TeamFollowBack” anymore. So I started to be rather selective as to who to follow consequentially out of experience of twitter, became rules. END_OF_DOCUMENT_TOKEN_TO_BE_REPLACED

END_OF_DOCUMENT_TOKEN_TO_BE_REPLACED

This is the second part of the Online Privacy series. I suggest you read the introduction before reading this but that’s up to you.

Self-contributed data can be the holy grail to a Private Investigator if you are something like a “tweetaholic” (compulsive twitter user) or a facebook addict. Although facebook has privacy settings, if this isn’t set correctly then it’s as good as publicly broadcasting your life. I know that adjusting your privacy settings can be a painful and confusing experience.

END_OF_DOCUMENT_TOKEN_TO_BE_REPLACED

It has come to that time where I have tweeted over 1000 tweets which makes me feel like an official tweeter.

I started using twitter after a few friends of mine (tim & addy) convinced me that this was the most revolutionary social networking tool. Having created an account I didn’t find anything special about it as initially I was only tweeting twice a week with nothing particularly interesting. It was just a simple website that even I could make for users to tell their followers what they are doing.

END_OF_DOCUMENT_TOKEN_TO_BE_REPLACED

I have to say that this is one topic I have been wanting to get off my chest for ages!

Currently we are going through the Mobile Phone era and have been for the past 10 years or so. Everyone I personally know above the age of 10 has a mobile phone of some sort and it has become one hell of a phenomenon and has now become a fashion statement to have a mobile that can do certain things. Looking over the past few years you can see why people have been getting certain phones that can do certain things: END_OF_DOCUMENT_TOKEN_TO_BE_REPLACED